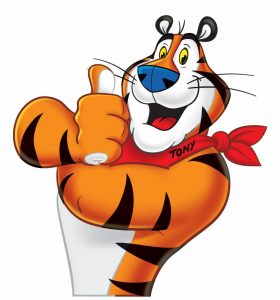 Back in the 1840s, a Christian named George Williams watched as thousands of young men poured into the cities for work as the Industrial Revolution was hitting its stride. Brothels and taverns were largely the only diversions available, and Williams felt burdened to provide something better. His vision was to put Christian principles into practice by creating a place for young men where they could develop in “body, mind and spirit”. The Young Men’s Christian Association was born, whose red triangle logo represented William’s three-fold focus.

W.K. Kellogg, inspired by his Seventh Day Adventist roots, believed that good nutrition was very much a part of being a follower of Christ. One day back in 1894, Kellogg and his brother accidentally left some cooked wheat lying around. As they went to throw the stale leftovers away, the wheat broke apart into flakes in their hands. On a whim, they put the flakes in the oven and toasted them. Kellogg said to his brother, Tony, “They’re great!” (Actually, I made that sentence up.) But they were tasty, and when they tried the same thing with corn, the toasting worked wonders again. Cornflakes was born. A new and healthier breakfast alternative was created by a man whose faith led him to ponder the care and discipline of the body.

Williams and Kellogg would probably both be dismayed by what they’d see in the church today. A recent study by Northwestern University analyzed 18 years of health data from 2,400 people nationwide, and found that when compared to people with no church involvement, once-a-week churchgoers were more than twice as likely to become obese. Potlucks, smotlucks!

I heard a stout Christian comedian once say, “If my body is a temple of the Spirit, then I’m a megachurch.” I laugh even writing it down, but it’s honestly not a laughing matter. The training of our bodies should matter a great deal to us, because it is a key component in our fight for freedom from sin.

Why should we care to discipline our bodies? Here are five compelling reasons.

For starters, because God cares a great deal for what I do with my body.

Eastern thought tends to find the body a nuisance, and the quicker we can shed it, the better. Not so with Christianity. God created the heavens and the earth, then declared it all very good. Matter matters, to him. It mattered so much that God took on human flesh in Christ and came to earth, then laid his body down for us, that we might be given the chance of receiving a new and sinless body one day.

Some Christians will casually quote Paul who said to Timothy that physical exercise is of some value – so Paul’s “meh” is their “meh” (1 Timothy 4:8).  But let’s not forget, back then they worked outdoors, walked everywhere and didn’t have cupboards stuffed with Twinkies. I doubt that very few of them came home and said to their spouses, “Hey honey, I’m running down to Jerusalem Fitness to hit the free weights.”

For another reason, my body, soul and spirit are interwoven. What impacts one area affects the others.

Our bodies aren’t little Las Vegases. What happens in my body, stays in my body. A flu bug will flatten your will and sap your spiritual desire. (The puke falls from the just and unjust.) It works in the other direction. David’s unconfessed sin caused his bones to waste away and his strength to dry up (Psalm 38:3-4). You may think that you can manage your porn problem without it hurting your marriage or your ministry. But like swallowing a small nail, you will be damaged in ways you won’t even see at first, long before you start bleeding out in the open.

Third, we learn principles of Christ-like stewardship by disciplining our bodies.

I’ve heard others shrug off discipline of the body by saying, “But our bodies are only temporary”, and then as though to seal the deal, they recite stories of fitness freaks who died of sudden heart-attacks, in contrast to chain-smoking, bacon-inhaling, sugar-addicts who lived till they were ninety. The logic being, Life’s a crapshoot, so why bother? (Which is a lie – all things being equal, good fitness habits lead to a healthier, longer life.)

Why bother? Because Earth is a training ground for heaven. Everything about our lives is temporary compared to eternity. Nothing lasts, and nothing gets brought with us to the other side – except the character we forge in the hundreds of daily decisions we make interacting with all these temporary things. Sure our bodies are temporary, but so is money. Why bother then learning how to work hard, save, budget and be generous? Our relationships are all temporary. Why bother learning how to love, sacrifice and forgive? Communities are temporary. Why bother fighting for decency and working for justice?

Why bother? Because learning discipline is an eternal value that reflects the character of God. Everything we learn in this life about stewardship – of taking care of the things around us – are lessons we will carry with us into eternity.

Fourth, bringing order to our lives leads to an uptick in joy.

Too many see discipline as a drudgery, when we ought to see it as life at its best. Author Erich Fromm wrote, “Discipline should not be practiced like a rule imposed on oneself from the outside.” Instead, it should become “an expression of one’s own will, that is felt as pleasant…that one would eventually miss if one stopped practicing it.”

Ten years ago, in my forties, I took up jogging. My bad back had taken a gouge out of my racquetball playing, and I needed something to keep the weight down. I despised running with a passion while younger (as much as the woman who said she gave up jogging because when her thighs rubbed together, it set her pantyhose on fire.) Then strangely, a month or two into my running experiment, I noticed that I was actually enjoying it, and even – cough – looking forward to it. Whenever we traveled, I’d try to find time to run, because it made me feel more closely connected to where we were staying. I will be disappointed if we get to the other side and Jesus doesn’t lace up a pair of running shoes with me to keep our little thing going.

Fifth, training the body is of great importance for avoiding sexual sin.

After all, the body is the vehicle we drive in as we head down Impurity Boulevard. If I can acquire order and balance in areas like exercise and nutrition, then I ought to be able to do the same with other areas. If I can teach my body how to say no to things it desires but doesn’t need, and say yes to things it needs but doesn’t desire, then it stands to reason that this same power will become available in other areas.

So how do we train our bodies? When I think of the discipline of the body as described in Scripture, I see three levels that ought to be practiced, depending on the severity of the sin. As each level advances to the next, we find increasing freedom and self-control.

We’ll tackle self-abasement today, and the other two tomorrow. 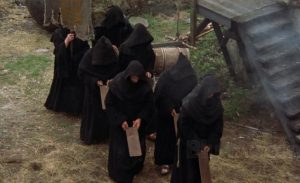 To be abased is to be humbled, dishonored or lowered in rank. It doesn’t sound like a pleasant thing, and it’s not. To be at this stage is to acknowledge that I cannot control myself, and so order must be imposed on me from the outside. So the person submits to any number of rigid, legalistic measures so that the behavior is in a sense locked up behind bars.

Asceticism is a word sometimes used to describe this approach. In the second and third centuries of the early church, a few Christians began to intentionally head to the desert to build communities removed from the pressures of living in the pagan Roman world. The monastic movement was born (think, monks and nuns).

The problem with an ascetic approach to life is that while you certainly remove the outward temptation further from you (which is not a bad thing) you still leave intact the inward weakness which made you liable to the temptation in the first place. Getting you out of Rome is simple, compared to getting Rome out of you.

When Jesus said, “If you right eye causes you to sin, tear it out and throw it away,” obviously he was using a bit of hyperbole here, or we’d all be walking around like pirates with eye patches.

“Rough go last week, eh matey?” “Arrh. Shore was.” His was a Jewish way of making a very serious point. For all our talk about God’s mercy and grace, we must never forget that in yielding to this sin, we are dabbling with hellfire. For that reason, we must be willing to adopt real ruthlessness with ourselves, if we truly fear God.

Never forget if you are practicing self-abasement that this is a basic level-one holiness strategy, and the reason you are taking this step is because you have proven yourself weak and unreliable. It’s a sign of immaturity, not maturity. I’ve seen Christians, in fact entire churches, reduce faith in Christ down to nothing but rules and regulations, then become proud of their legalism, to the point where they pat themselves on the back for their monumental holiness while at the same time blasting other Christians for their liberal, compromising ways.

But the Bible says “for freedom Christ has set us free” (Galatians 5:1), and the stronger in faith we become, and the more like Christ we become, the fewer laws we’ll need to live under (Galatians 5:23).

When my daughter was ten, I told her what movies to watch, with lots of “Thou shalt nots”. When my daughter was fifteen, we talked together about what movies she should watch, with lots of “What’s good and bad about this?” By the time she was twenty, her moral heart was strong, and she made those decisions for herself. Living by rules is easy. Learning to live by love and wisdom is more challenging, but more liberating, and better by far.

What do you think accounts for studies which show Christians to be in worse physical shape than other groups of people? What are we thinking or doing wrong?

“Why are you cast down, O my soul, and why are you in turmoil within me? Hope in God; for I shall again praise him, my salvation and my God.” ~ Psalm 42:11