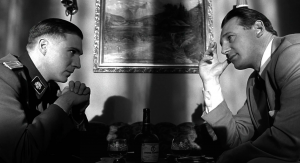 And grace will lead me home.”

In Stephen Spielberg’s classic Schindler’s List is a haunting scene (among many) where Oskar Schindler (a German businessman who employs Jewish prisoners in his factory to save them from the Nazis) is drinking with Amon Goethe (the crazed commandant of the prison who unleashes a reign of terror over the camp.) Observing that Schindler is not drunk like him, Goethe says, “That’s real control. Control is power.” Schindler – who must delicately shield his love for the Jews from Goethe – recognizes an opportunity to sway him.

“Power is when we have every justification to kill, and we don’t,” he says, then tells the story of an emperor who pardons a thief brought before him. Leaning in to stare deep into Goethe’s soulless eyes, he says, “That is power, Amon.” Goethe laughs him off with a mocking, “I pardon you,” but Schindler’s words stick to his heart like the burr of a weed.

A short time later, Goethe inspects a tub cleaned by a Jewish boy, and finds it dirty.  Goethe tightens up, his rage mounting, but something softens in him and he dismisses the boy saying, “I pardon you.” After the boy runs out, Goethe stares into the bathroom mirror and rehearses the line again, but the words ring hollow. Seconds later, as the boy makes his way across the prison compound, Goethe shoots him dead from the balcony of his home.

Like a sliver of sun breaking through on a cloudy day, for the smallest of moments a door of redemption opened before Goethe. He saw a glimpse of what could be. The light of grace fell on him, and he blinked at the vision. But then just as quickly, once the evil that ruled him tugged harshly on its chain, and demanded that he return to himself, Goethe rejected the vision and refused the light.

In contrast to Goethe, Oskar Schindler responded to the grace that came to him. When the movie begins, he is nothing but a bottom-feeder trying to swim his way through the Nazi flotsam and come out of it alive and wealthy. But then he witnesses firsthand the horrors of the Final Solution. He comes to know, then love, the Jews who work for him. And when that moment arrives where the evil in him tugged harshly on its chain, demanding that he return to himself, unlike Goethe he pushes back against the evil, and walks the path that grace illuminates for him.

It’s More Than A Movie 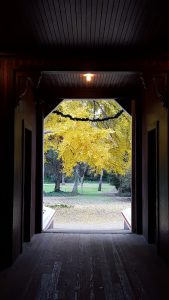 This is more than a movie. It’s a reenactment of what occurs each day in the hearts of thousands upon thousands of people as they wake each day and wend their way through life. It’s a picture of what is happening inside of your heart and mine.

You may protest, “I’m no Goethe!” No, not now. But then you haven’t likely faced the corrupting squeeze that laid hold of the necks of the German people in the 1930s. If you’re suggesting that you are better than Goethe, that you are good, I’d like to counter by saying that you are only untested. There is a little Goethe inside of each one of us, a chain of evil coiled around our hearts, and the only thing that can save us from it is for the grace of God to appear before us and open a doorway to freedom.

What I’ve come down to in my search is simply this: it’s grace that will lead us home. Grace – meaning the unexpected, unannounced, undeserved power, provision and presence of God that breaks in to our lives over and over again, that calls us to forsake the evil in us and run to him. Grace that throws open a door to freedom for us, and bids us to run through it.

Grace may come in a person God sends who counters our vanity and self-assurance, as Schindler countered Goethe. As Dr. Thaw countered me. As Ambrose countered Augustine.

Grace may come in a book that jars our assumptions and ignites our hearts. As hopefully this book has done for you. As Confessions did for me. As Cicero, Antony and Paul did for Augustine.

Grace may come in a sermon or a song or a movie or a billboard or a radio program.

Grace may come as a whisper in a heaven-sent moment where beauty breaks out around you, lifting your gaze to consider real Beauty.

And grace flows fullest from the fountain of grace, Jesus Christ himself – who waits to meet with you and speak with you through channels that are much too mundane for the sophisticated and wise. An open book upon your lap. Knees on a floor, eyes looking up. Sitting in a cold church on a hard pew. A piece of bread and a cup of juice or wine in your hands. Reciting a verse till it’s memorized. Going without food for a meal, or a day. Confessing your failure to someone sitting across from you.

It’s not those activities alone that matter, any more than it’s the hose at the gas pump that fills your car. It’s what flows through the pump that counts. It’s what flows through those activities – the power, provision and presence of God – that counts. And as you grow in your awareness of this grace at work in you, as you begin to think biblically, then theologically, then transformationally, as you begin to respond to this grace and not resist it, over time a love for God and for all his image-bearers will begin to grow inside of you. It’s this love that will break in two the chain of evil around your heart.

If I were a politician, I might say, It’s the relationship, stupid. While evil is calling you back to yourself, your Maker is calling you to Himself. The outcome of your life will be determined by which voice you respond to.

I heard someone once say, we are human beings, not human doings. This isn’t complicated. I present myself before God with gratitude and worship. I read and reflect. I quiet and open my heart to my heavenly Father, then listen for Jesus through the voice of the Spirit. Then respond. This is where the joy and power of faith is found. “Be still and know that I am God.” (Psalm 46:10).

We must learn to be Mary’s first, then Martha’s. Be, then Do. Some Christians are just Be-Be’s. They read, worship and pray, but keep it all to themselves. And like a bee-bee, their lives are small and inconsequential, having little impact. But then there are many Christians who are just Do-Dos, and they make a lot of Do-Do living like that. Doing things Jesus never called them to do, and doing things in their own power, not his.

Though our journey together is winding up, the one that matters most for you is just beginning. Because God is the Master Artist, the story he writes with your life will be different from mine. That’s the wonder of it. But I know how each of our stories will end. Something like freedom will come wafting in the wind.

I commit you my friend to the grace of God.

Why did Schindler and Goethe end up in such different places?

We are human beings, not human doings. What does that mean to you?

“For the grace of God has appeared bringing salvation for all people, training us to renounce ungodliness and worldly passions, and to live self-controlled, upright, and godly lives in the present age.” ~ Titus 2:11-12