Introduction To Week 5: How One Young Man Found Freedom 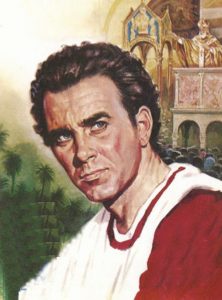 He was born in 354 A.D. It’s funny how sometimes we think to ourselves that there’s little to be learned from people from such a bygone era, but then we’ll turn around and be inspired by the Bible, which was written even further back. The truth is, swap out our clothes and tools, humans are pretty much the same going as far back as we care to see. The things we marvel at, they marveled at. The things we struggle with, they struggled with. It can be a worthwhile exercise to compare notes with someone from a past generation – especially someone like this, who left us so many notes.

His name was Augustine. He was born in north Africa in what is today Algeria, at the time when the Roman empire still encompassed the Mediterranean world. Though his father was a pagan, his mother Monica was a devout Christian, whose influence shaped her son until his conversion to Christ, when Augustine was 31. His career as a Christian was legendary. Within ten years, he was appointed bishop of the see of Hippo, where he served until his death in 430.

He was a prodigious preacher and author, producing more than a hundred surviving books, ranging from doctrinal studies where he defended the faith against numerous heresies battering the Church in his time, collections of sermons and biblical commentaries, and devotional works such as his autobiographical classic Confessions and his great tome City of God written to encourage believers after the sack of Rome in 410. His theology shaped the thinking of the Catholic Church for the next millennium, inspired the first generation of Protestant reformers, and continues to cast its shadow over the Church today.

Confessions is a biography of sorts which Augustine wrote in his mid-40s, chronicling his life through his conversion. I say “of sorts”, because while written in part to encourage human readers, his primary audience is God.

Confessions is a psalm of praise, thanking God for saving him. We may think of “confession” as an act of pouring out our sins to God – and Augustine does plenty of that in his book. But Augustine also intends for his words to serve as a confession to the greatness of the love and mercy of God for him, which he then echoes back with his own confession of love for his Savior. (Not since the psalms of David written more than a thousand years earlier do we find in human writing such majestic, heart-stirring worship to God.)

Because he writes from the vantage point of a man safely on the other side of his rescue, he is able to also offer mature and seasoned commentary on the dark roads he traveled before Jesus’ love at last broke through to his heart. His reflections on the sin nature of humanity, on the seductive oiliness of culture, on the psychology of addiction and the traitorous weakness of the human will offer far more insight into the human condition than 99% of what’s written today in this age of therapy.

This week we are going to walk with Augustine, using his own words in his Confessions as much as possible to guide us. It’s life-giving, even life-saving, to spend time with people who know exactly what we’re going through, and can say to us, “I got through this, and so can you.” My prayer is that you will experience some of the same epiphanies and power that changed my life as I read the words of this great man of faith.