You Have A Calling On Your Life 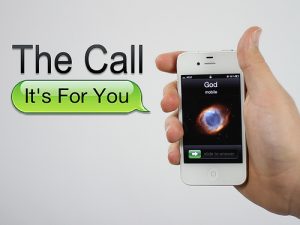 Do you ever feel like a fifth wheel in God’s kingdom? A black sheep? The unexpected child that is tolerated, not loved?

Writer Os Guinness is convinced that one of things plaguing the modern church is that Christians have lost their sense of calling from God.  We may think to ourselves that if we’re not the pastor, or on the worship team, then we must be overlooked by God, and our contribution matters little to him. But every Christian has a calling on his or her life.  Multiple callings in fact.

First, God calls you to salvation.  Jesus said in John 6:44, “No one can come to me unless the Father draws him.” You may think – and sing – “I have decided to follow Jesus.” Well, not exactly. What you decided to do was say Yes to God’s call on your life to follow his Son. God called out to you first. You couldn’t know him otherwise.

Second, God calls you to a life of holiness. Romans 1:5 says that through Jesus, we have “received grace…to call people…to the obedience that comes from faith.” God loves us so much that he calls us to a new life in Jesus. We don’t have to remain stuck in the same old habits, ruts and sins that have made such a mess of our lives. Perhaps you need to hear God afresh calling you to repent of self-centered, self-destructive ways and embrace the new destiny that God has for you.

Third, God calls you to enjoy a relationship of love with his Son. Romans 1:6 says, “You…are called to belong to Jesus Christ.” We all have times in our lives when we feel like the kid at recess who never gets called by the captain to join the team. We wonder if God cares for us, let alone even notices us. But Jesus calls out to us, “You belong to me. I want you on my team.”

Fourth, God calls you to be a saint. Romans 1:7 says we are “loved by God and called to be saints.” Too many believers think of sainthood as a spiritual Hall of Fame, that only a select few get to join. But biblically speaking, you are called to sainthood the moment you enter God’s kingdom. The word ‘saint’ literally means to be set apart, or separated from others. But God doesn’t set us apart from other believers because of the amazing things we have done. God sets us apart from unbelievers, because by faith we’ve accepted the amazing things God has done for us. See the difference. Tradition says, “Do lots of good things, and maybe you’ll become a saint.” God says, “I’ve made you a saint; now go do lots of good things.”

And fifthly, God calls you to serve others in his name. Paul writes in Ephesians 4:1, “As a prisoner for the Lord, then, I urge you to live a life worthy of the calling you have received.”