A Case Study In Judgmentalism 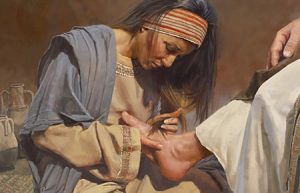 When Jesus said, “Do not judge, and you will not be judged” he was not telling his followers never to exercise moral judgment. He was not telling us to unplug our brains and wink at bad behavior.

Jesus has been invited to the house of a Pharisee name Simon. As Jesus’s popularity spread like wildfire, it made sense that the Pharisees would try to figure out where this new and provocative leader was coming from. So this dinner was away for the Pharisees to “get acquainted” with Jesus.

Midway through the dinner, an intrusion occurs. A woman, whom Luke describes as having “lived a sinful life”, barges into the man’s house. Without saying a word, the woman begins to cry at Jesus’s feet and actually begins to use her hair as a towel of sorts to wipe them. She then opens up a jar of perfume, which was as expensive back then as it is today (and has caused men from every age to weep and gnash their teeth) and she pours it over Jesus feet.

First of all, get rid of any 20th-century Hollywood eroticism from your thinking as you consider the story. There is absolutely nothing sexual about what this woman is doing. This is solely an act of submission, common in the ancient, Middle-East culture. It was a deep and moving demonstration of reverence, nothing else. What offends Simon the Pharisee is not the fact that someone has fallen at Jesus’s feet. It’s who this woman is that disturbs him. And so Simon mutters under his breath, “If this man were a prophet, he would know who is touching him and what kind of woman she is – that she is a sinner.”

Luke does not tell us, but chances are that the sin this woman was known for was probably visible and public – prostitution or adultery or some such thing. And so Simon thinks to himself that if Jesus were really a prophet, he would have seen who this woman was and then pushed her away. That’s what a Pharisee would do.

This is when Jesus turns the table on Simon and exposes his judgmentalism (which now has two layers to it, for Simon is now not only judging the woman, but Jesus as well. Brave man!)

There’s a certain humor in this moment, because remember, Simon has kept his feelings to himself. Jesus is a prophet and can see inside people’s hearts. Hearts like Simon’s. “Simon, I have something to tell you,” Jesus says. And he proceeds to share with him a short story about two men who owe money to a lender. One owes a couple year’s worth of wages. The other a couple months. The lender forgives both debts.

“Which loves the lender more?” Jesus asks Simon. Naturally it was the one forgiven the greater debt. Like this woman here. Jesus could see inside her heart. And what he saw was someone who was repentant, and sorry for her life of sin. Someone who was weary with her life and who desperately wanted to start over. Someone who wanted God’s forgiveness and God’s power and God’s acceptance. In Jesus, she found everything her heart longed for.

“Your sins are forgiven,” Jesus says in the end.

In the next few devotions I’m going to identify what I see as some of the very specific behaviors Simon shows that betray his judgmentalism. But what do you see in the story? Think deeply about this story and come up with your own list. We’ll compare notes in the next devotion.