Loving Your Enemies: What It Doesn’t Mean 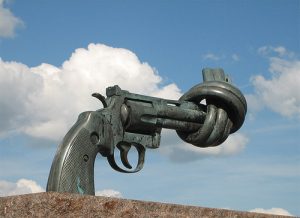 Christ’s teaching that his followers love their enemies is arguably one of the most difficult of his commands to process, let alone obey. An enemy means a bully, an abuser, a swindler, a terrorist, the spouse who abandoned us (and these days a member of the other political party.) Immediately, we protest, “Lord, you expect me to love them?” Immediately, we raise up a thousand objections: It’s impossible! It won’t work! It’s weakness!

Looking at the example of the early church however, we observe some qualifications of what it means to love one’s enemy. And when we see it play out in real-time, what we notice is it’s as far from weakness as can be. It is in fact the height of moral strength. Here are three things that loving our enemies doesn’t mean:

It doesn’t mean we don’t speak out against evil.

If there was no speaking out against evil, then this approach would indeed be the epitome of weakness. The Bible tells us to speak the truth in love.  We see the early Christians confronting the evil they face time and time again. Evil needs to be exposed as evil with all the conviction and passion we can muster.  Jesus spoke truth to power at his own trial.  Only at the end did he button up and refuse to play the game anymore with his accusers.

The apostle Paul spoke loudly and clearly in his own defense at his many interrogations and trials.  The early church fathers wrote blistering articles and books addressed to the Roman authorities, protesting the way Christians were being treated. Loving our enemies does not mean we keep our mouths shut.  We call a spade a spade.

It doesn’t mean we don’t take full advantage of every legal recourse at our disposal in fighting evil.

Paul was falsely accused and arrested by his Jewish opponents. Did he just turn the other cheek and accept their punishment? No – he appealed to Caesar. As a Roman citizen, Paul had certain rights which the law gave him, and more than once, Paul played this trump card to his advantage.

As we struggle against evil in our society, we are privileged with tremendous avenues of freedom and legal recourse in America. Particularly as religious liberty comes under siege in our culture today, we need to make full use of the power at our disposal. We must also use that power to come to the defense of our suffering brothers and sisters around the world.

Jesus said, To those who are given much, much is expected, and American Christians have been given much – so we need to use it. We ought to be involved politically and judicially in fighting for righteousness. This is far from weakness.

It doesn’t mean we hang onto violence as a last resort if everything else fails.

We find in the example of the early church that when their speaking and preaching failed, and when every legal recourse dried up, even when the law turned against them, Christian refused to do two things: 1) They refused to compromise their faith, and 2) they refused to resort to violence to find vindication, but accepted whatever mistreatment was given them.

They never held violence in reserve, ‘just in case’. The Jewish leaders told Peter and John, “We order you to stop preaching in Jesus’ name.” Peter and John shrugged their shoulders and said, “We must obey God rather than men.” Yet when they were beaten and imprisoned for breaking the law, they accepted the mistreatment. In fact, the Bible says they rejoiced that they were counted worthy to suffer for Jesus. And they refused to turn to violence as a solution. You call this weakness?

Paul wrote most of his letters from prison.  Anyone out there care to call Paul an impotent man?

It takes far more courage to act like this than it does to take the easy way out and turn to violence. September 11th was one of the greatest examples of moral cowardice we have ever seen.  And every suicide bomber is a moral coward.  But let’s not stop there: every person who has ever bombed an abortion clinic or planted a burning cross in someone’s lawn, or looted a neighborhood in “protest” at police brutality or threatened college students for inviting a speaker they might disagree with – these are nothing but moral cowards, a million miles away from the heart of the Savior who commands us to love our enemies.