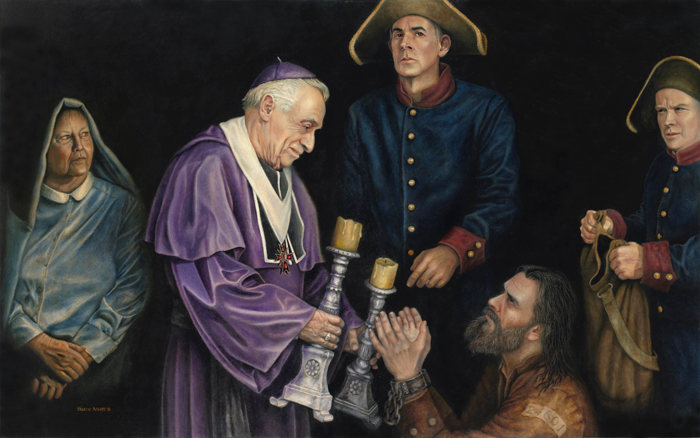 A second way to obey our Lord’s command to love our enemies is this:

I will develop the instinct to prefer mercy over justice.  My enemy is someone worth saving.

In Romans 12:17-18 Paul writes, “Do not repay anyone evil for evil. Be careful to do what is right in the eyes of everybody.  If it is possible, as far as it depends on you, live at peace with everyone.” This is behavior that is asked of Christians.

In the timeless story Les Miserables, Jean Valjean has just been released from prison, where he has served time for stealing bread. He has no money, and he spends his first night out of prison in the home of a village priest who takes him in. In the night, Jean Valjean flees the priest’s home after having assaulted the priest and stealing most of his valuable silverware. But he is captured and the police bring him back to the priest so that he can be formally accused.

For Jean Valjean, this means his last hope is gone. He will now be imprisoned for the rest of his miserable life. The priest comes to him and looks him in the eyes, and says, “My brother, why did you leave so quickly last night? You took only the silver. But I gave you these as well.”  And he places in his hands several more golden candlesticks.

The priest had the right to ask for justice.  But he saw something worth saving in this thief, and gave mercy instead. That moment changed Jean Valjean’s life.

You and I are also recipients of divine mercy. God has a right to treat us with justice. In our sin and rebellion against him, we deserve hell and judgment. But in Christ, God gives us mercy instead. We should look for chances to treat others that way as well.

Back in the late 80s, my wife and I spent a year in inner city London serving a Baptist church there with a couple remarkable Christians. Paul and his wife Helen were preparing to become missionaries to Pakistan. And Paul had the most remarkable love for the people living in the church’s neighborhood.

One day, Paul and I were walking across a playground, standing in the shadows of the oppressive, prison-like government housing projects that surrounded us. We came across a group of 3 or 4 kids who were breaking empty beer bottles against a wall. A bit of anger and “tsk, tsk, tsk” welled up within me. If ever there were kids that needed to have some of the fear of God put in them, it was these.

Paul though stopped and looked at them, and a sympathetic smile came across his face.  And I’ll never forget his first words. Tenderly, he said, “You guys are kind of bored today, aren’t you?” He saw past the behavior, and saw something worth saving instead. And he was able to plant a few seeds of the gospel of Jesus into their hearts that day. His approach of mercy blew me away.

Can we look at that high school punk who arrogantly walks past us with orange and blue hair and a cigarette in his mouth, and rather than curling up our lips to despise him, can we see something else? Can we see the little boy whose father abandoned him, whose mother taught him nothing but profanity, whose mother’s boyfriend abused him? Can we see past the arrogance and cigarette smoke to see a bleeding, wounded spirit that’s never been loved? Never received mercy before?

James 2:13 says, “Judgment without mercy will be shown to anyone who has not been merciful. Mercy triumphs over judgment.”  We have a right to demand an eye for an eye, and a tooth for a tooth. We have a right to appeal for justice. But our instinct should be for mercy instead.