Service Is Not Spelled S-E-R-V-E-U-S 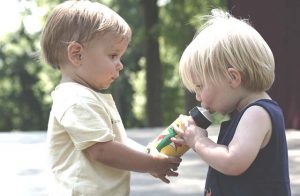 In John 13 is a famous story about Jesus washing his disciples’ feet. Ever wonder why you’re on this earth? Well this story gets to the heart of it.

Jesus, the Son of God, the Messiah, the Christ, the King of kings, gets up while he is eating his last supper with his disciples, and removes his outer cloak – this beautiful, seamless tunic, symbolizing his rabbinic and royal authority, that was such a valued garment that when he was crucified, the soldiers threw dice for it rather than rip it apart. Jesus removes this garment and wraps himself in a towel.  He takes off his king’s clothing and dresses up as a mere house slave.

If that weren’t bad enough, then he does something unthinkable – he begins to wash the disciples’ feet.  You and I modern readers might find the footwashing part of the story odd, because it’s just weird to let somebody else touch your feet.  The disciples didn’t find that weird.  They were used to footwashings – it was part of everyday hospitality back them.

What was weird for the disciples was not the footwashing, but who was doing it.  Only slaves washed feet.  Yet, here was Jesus doing it.  It’d be like the garbage truck coming up to your house on pickup day and having Ryan Gosling jump off the truck to empty out your bins.  It’d be like having President Trump over for Easter dinner and finding him washing dishes after the meal.  It’d be like Celine Dione jumping off stage after one of her Las Vegas shows and stacking up the chairs.

And when it’s all said and done, Jesus looks his disciples in the eyes and says these words: “Now that I, your Lord and Teacher, have washed your feet, you also should wash one another’s feet.  I have set you an example that you should do as I have done for you…Now that you know these things, you will be blessed if you do them.”

According to Jesus, we don’t find our lives till we lose them – in service to others.  We don’t live until we die – to ourselves.  We don’t become free until we become slaves to one another.  It’s all so upside down, or is it right-side up?  Maybe it’s the world that has it all backwards. Even many Christians hear the word service and spell it S-E-R-V-E-U-S.

Give it a try today. Intentionally try to put other people’s needs ahead of your own. Come up with a list of three to five people that you might serve in some fashion.  Give your spouse a heart attack and do something unexpected and unsolicited to make their day go a little easier. Jump down from that throne you’ve put yourself on. Take off your king’s cloak. And live like Jesus.