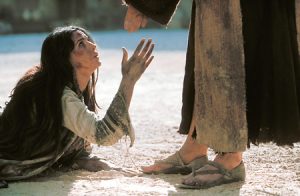 Two other traits always seem to bubble up in those who have judgmental hearts.

Judgmentalism uses arbitrary standards to judge by. In John 8:1-11 is the story of a woman caught in adultery, then dragged before Jesus by the Pharisees (playing the role of the legalists.) Now what’s wrong with this picture?

Where was the man?

But this is what judgmentalists do. They see only the part of the law that they want to see. And remain blind to all the rest. Their standards are arbitrary.

The Pharisees were notorious for this. They got angry at Jesus because he didn’t wash his hands the right way, and he healed people on the Sabbath – the nerve! – and he upset their applecart of traditions which had nothing to do with Scripture.

Legalists are still like this today. They judge people by the clothes they wear, or the version of the Bible they read. They rail against outward sins, but are oblivious to inward sins such as materialism, pride or prejudice. When Jesus said in the Sermon on the Mount, “Before you remove a speck from your brother’s eye, make sure you take out the plank from your own eye,” this is exactly what he was talking about. Make very sure if you’re going to start calling people to account for the way they live, that the way you live is exemplary.

It’s at this point that I call to mind something very sobering that Jesus said in his sermon. “For with the measure you use, it will be measured to you.” If you’re a judgmentalist, that should cause you to tremble. At least it should cause you to reevaluate your standards for judging others.

Judgmentalism blinds us to our own sin. I don’t think that Jesus was saying to Simon the Pharisee (from the story we considered earlier in Luke 7) that he needed forgiveness any less than the sinful woman. I think in a very subtle, but powerful way, Jesus was suggesting to Simon that he needed to be at Jesus feet just like she was. But Simon was blind to his own need for God’s forgiveness.

Once this thought sinks in, your spiritual eyes become blinded and you become useless to God.