WWJD: What Would Joseph Do?

Mary seems to get all the air-time during Christmas but Joseph offers a remarkable character study of a godly man, and this is not an unimportant subject. I hear it all the time today from young Christian women: Where are the godly men today? Is there a guy out there who can put two sentences together without inserting profanity? Whose mind isn’t overrun by porn? Who doesn’t need a kick in the pants to put down his toys and take financial, relational and spiritual responsibility for his life? (And it’s the men in church that these women are referring to!) So think about the qualities Joseph exhibited in the Christmas story.

First, he was a master of his emotions. What do you think Joseph was feeling that first Christmas? To be in love with a woman, and then find out one day that she is pregnant and you know this is not your baby. There is no anger on earth like the anger felt when you believe the one you love has been unfaithful to you. I’m certain Joseph was at least tempted to slap Mary around. Tempted to find out who slept with her and take one of his carpenter’s hammers to his head.

And yet we’re told he did not give vent to this tidal wave of emotion within him.  “Because Joseph her husband was a righteous man and did not want to expose her to public disgrace, he had in mind to divorce her quietly,” the Bible says.

Joseph also teaches us that a godly man is a master of his sexuality. As most of us know, God instructs Joseph to go ahead with the marriage because the baby in her womb is God’s baby, conceived in her by a miracle of the Holy Spirit.  Matthew tells us that upon waking from the dream Joseph married her as the Lord had commanded.  Then the Bible says this (and we often breeze right past it) – “But he had no union with her until she gave birth to a son.”

Don’t think for a minute that this was an easy thing for Mary and Joseph to do – these two hormonally-charged, love-sick, young people who were now legally married. But they did do it. Which is inspiring to know. 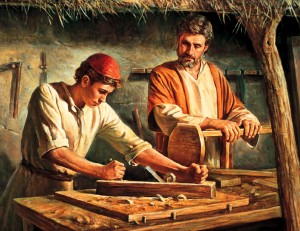 Well, no it’s not impossible. Just look at Joseph. Stop saying to yourself, “It’s no use. Everybody’s doing it.” No they’re not. Stop saying that’s there’s something unique about your situation that makes it impossible for you to control yourself, to shut down the computer, and to learn to love a woman with honor. The same God that helped Jesus’ parents fight for purity will help you also.

Thirdly, Joseph was a master of his home. The Christmas story tells us that Mary is visited by the angel Gabriel prior to her conception. But after this moment, whenever angels came calling – and they did so three more times in the Christmas story – the one they appeared to was Joseph.

In God’s eyes, Joseph was the head of his home, responsible for the protection and leadership of his family. The buck stopped with him. And men, however you slice it today, when it comes to the spiritual and emotional well-being of your family and your society, God gives that responsibility to you first. (And not because you’re better or stronger or smarter. It’s probably the opposite – he knows that you’re the one who will passively check out at the first opportunity and grab the remote.) The buck stops with you. Stop letting your wife or girlfriend be the one who gets everyone to church on Sunday. How about you being the one who picks up the Bible at dinnertime and leads a devotion? Why don’t you grab her hand and say, “Honey, let’s talk to God”.

WWJD – What would Joseph do? Then…what will you do?